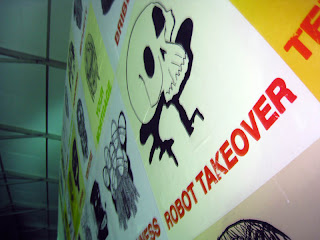 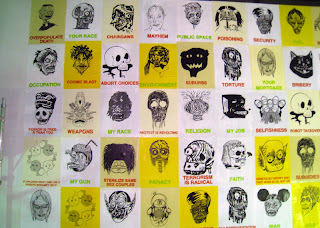 I arrived in Miami on Friday morning of the 19th. I had very low expectations for the flight and was surprised how awesome the American Airlines flight was. I was upgraded to a Priority Class seat and felt like a prince while chatting with my seatmate. I got to the Executive Club corporate housing place we are in and promptly set out for a supermarket. Mate soda and Cassava chips in hand I chilled out until the  other artists arrived. We have been running around gathering supplies and plotting wall murals since. These are the first shots of the Monster install that Kayrock and I are overseeing. New heads and old dance together on the wall late last night after some beers and FourLokos. It was Kayrock's first experience with the fabled substance and he described the high aptly when he said,
"It makes I feel like I am coming down with a fever."