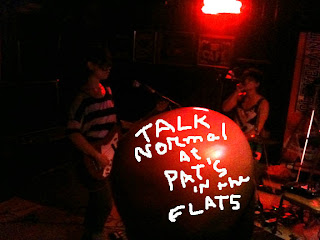 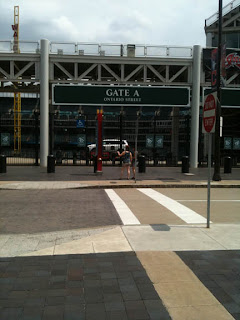 Talk Normal came through Cleveland while I was here on Tuesday. They crashed at my sister & Pat's house. They even had a chance to jump into Lake Erie before taking the stage at Pat's(different Pat) in the Flats. It was a special night all around since it was the birthday of Mystery Jim. I caught the opening band No Pony while helping the band load in. Their opening tune was a cover of "Bang Bang" which warmed my heart to them. I noticed then that one of the guitar players was wearing fish nets and hot pants. Sure, you think that ain't no big thing but he was a well built man and the hot pants where definitely tailored for our boy or his as it were. I knew they would be my favorite band playing with Talk Normal of the evening when I noticed the singer, Sam was sporting a Rammstein tshirt. I told her later of my like of her band. I felt cool in my Fenris (TNHC) tshirt but not as cool as Hot Cha Cha who had a church van and a trailer all hardcore style. They are firmly in it to win it after checking them out.
The next day we sauntered over to Progressive Field so that Andrya could scratch another ball field off her list. We bought out all the remaining Turkish pistachios at Alladins. It was the Westside Market for organic vegetables and a sausage sandwich.
If you are wondering what I am doing in Cleveland please see this