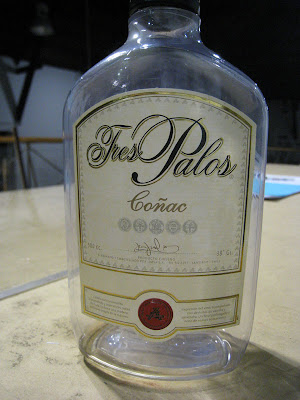 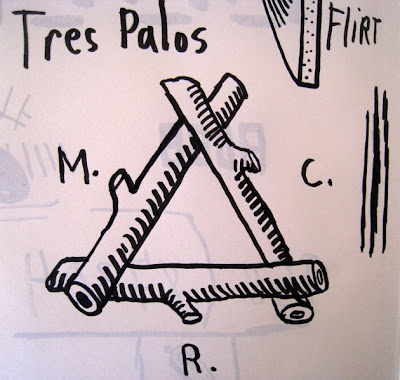 What you see above you is an empty bottle of Tres Palos Cognac. It was used to fuel a session of playing between Punto, Nicky Ducci, and me. Tres Palos translates to English in some amusing ways. It means three different things which all occur as threes too. One meaning is three hits or blows. It was defined as being beaten to me. The next way of reading Tres Palos is 3 million Pesos. A palo can refer to a million Pesos and three amounts to roughly $4848.03 United States dollars. The last way you can think about Tres Palos is as three attempts at flirtation. This was also explained to be a sleazy kind of flirtation like,
"I wish I was Bruce Lee so I could give you the Dragon Fist"
I will give props to Loma P for that gem.
The cost of a bottle of this fine brand of Cognac is $1650 Pesos which roughly translates to $2.666 USD. The bottle is plastic. The lid has a great drawing of some branches on it which I have sketched out here for your pleasure. I have been trying to figure how the letters on the logo might refer to the different meanings.