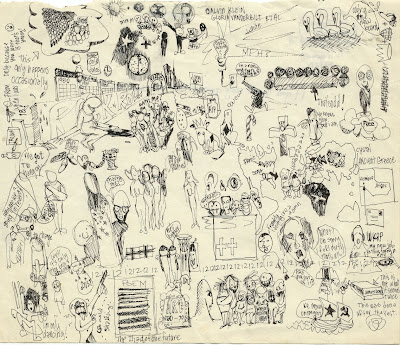 This was sent to me from John Schaffer. John and I went to high school together and had lockers next to each other for years because my name at the time was Scharf and then there was Schaffer. John had a love for David Bowie and I had an interest in further exploring the works of Mr. Bowie. This was because I was spending many hours listening to the glamorous Gothic sounds of Bauhaus. Since there was an emphasis on glam the band had covered some Bowie. We entered into a prehistoric kind of file sharing arrangement. I would loan John the records of Bauhaus in exchange for the wax of Mr. Bowie. In a short time, I owned nearly thirty records by Bowie. Always trying to find new ways to kill time in study hall we began to illustrate Bowie song lyrics and titles. This is one that I did of Bowie song titles from then. It is spooky how little my hand seems to have changed. See how many you can find.
(A little hint is that we there weren't any records recorded after Tonight when the drawing was created.)