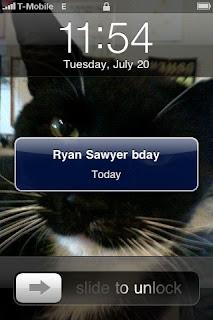 This morning I woke up and was greeted with this addition to my daily screen (yup, that is Doubles peeking through from the home screen). I took a minute to email Mr. Sawyer somewhere out in the world and wish him a Happy Birthday. I wouldn't normally write about someone's birthday but simply wish them a happy one like my sister's on the 16th. The strange thing about this one is the similarities in daily events between last year's Ryan Sawyer celebration and the events that transpired this year. When I emailing Ryan I recalled that last year we all travelled to a spa and bath for some rest, relaxation, and vittles. The bathhouse that was originally planned upon had been closed due to a robbery that day so everyone ended up at Sandoony.  It was such a nice jam that I even called and texted Ryan & Suzanne on my way back from JFK one night to get the address.
I drank some coffee with Julie and hustled off to a thrift store near the studio which closes at 13:00 uhr. I made my way back from the store stopping to get a snack for the studio. When I arrived at the studio within a few minutes Julie arrived and threw out the idea of swimming. We had already ventured out to the Old Danube to swim one evening so the spa in Bäden was suggested. It was a 20 minute bus trip and a 50 minute return train trip but it was worth it. As I put my head on my pillow; I reflected on how the Universe had led me again on Ryan's birthday to a spa and bath. I hope this is something I can count on again and again through the years.