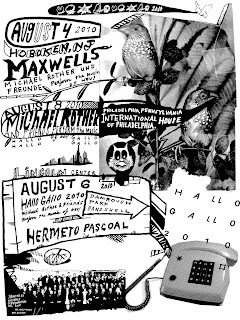 The last couple days I have been designing this for the members of Hallo Gallo 2010. This is the poster in conceptual form before printing after which a couple things will have changed like the color. They have some shows coming up and wanted a record of them.  Speaking of record; they are putting out a single as well. I did some tinkering with images for that. It is being released in connection with this. I'll dig up some more details and spill them here as the are revealed.
Some notes on the design: The whole poster including the writing was drawn on little ticks of paper in my apartment and then photographed with my digital camera. Once inside the laptop and adjusting for some distortion & put the whole design together. The bird postcard (cutup and altered) was found in an old paper store up the street from me in Vienna. The phone is a classic Austrian telephone from when the world relied on landlines. I found it in a closet and became a little obsessed with it. I liked the unrealized futuristic quality of the phone. It has the lines and curves that allude to a kind of fiction of science that seemed a possibility decades ago. This path has been deviated from and new lines drawn. I thought that this mirrored the music of Neu! and the path that the music and people have taken that brought them and us to Hallogallo 2010. The people are from a picture I bought in the Naschtmarkt flea markt of what appears to be a double wedding. The back is stamped with "Aelier Brat Inh. E. Hegenbart Amstetten"