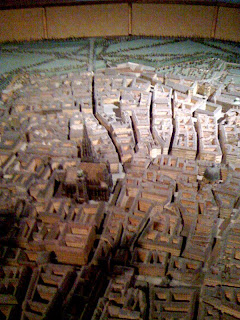 Went to the Wien Museum yesterday for the Wien in Film show. In front of one of the screens was this model of old Wien. I pointed out where I am staying to my friend Johannes. He has been visiting from Leipzig where he has the distinct pleasure of rooming with Anna Haifisches and Master James Turek. They along with Ms Simone Muller were all supposed to take a train to Passau and bike down. The morning they were supposed to leave Haifische went to hospital due to some blood & urine, and kidneys(all of which were hers). The remaining bunch got on the train that day and their varied stories are totally hilarious and I could only begin to reveal the iceberg that was struck repeatedly through their travels. I have had some great times hanging with them the last few days and neglecting some work. The beer drinking in Karlsplatz, the bagging of statues for just a few cents, watching the fights in bars, helping local "translators" pick songs on the jukebox, and dealing with toilets in hallways that lock with giant skeleton keys.