The only place you can pick up a Red Dawn II song for a good reason.


It has been spell since the Red Dawn II made anything that sounded like music and Japan had an earthquake. Both of these entities are still in desperate need of help but Japan can be fixed. 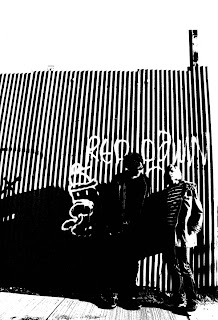 One Red Dawn II recording session has been released on a compilation to benefit two charities in Japan. It is Koozies, Woodies and Beer — An Ocropolis Japan Benefit
for information and purchase go Here
I am honored to have played with Red Dawn II on this record along side of such luminous talents as Liturgy, Akron/Family, Zombi, Mark Morgan, Christy & Emily, DubKnowDub, Oakley Hall, Knyfe Hyts and many more.
They are all live versions of songs done only for the dingle (digital single) project. I have just listened to it all the way through and am going to start it over again. The most I can say about my memory of our sesh is that there were a lot of doubles, brews, hooks and cognac consumed, regurgitated, and consumed during our session.
Checking out to check it out again.
+Wolfy

The Charities are:
Ashinaga and JOICFP
picked for us by Shinji Masuko from DMBQ and Boredoms.

The history of how the sessions and record came into being is interesting:
"It was an idea hatched during a Nov 7th birthday brunch for Kid Millions by Showtime. We would create a Stax-like studio band based around Oneida's now defunct Ocropolis studio. We would record and produce one song each from a list of our favorite local musicians; the sky was the limit. We both realized that we had about 2 years left in our amazing paradise of a recording studio and while we had done a lot. . .we still hadn't really taken full advantage of the studio. We hadn't made good on our mandate to become a resource for the community of musicians with whom we shared a home. Unlike many of the half-baked ideas which emerge from the Brah Records boardroom; this one had legs. We quickly abandoned the idea of being Brooklyn's backing band and decided that straight recordings ? kind of a Brooklyn waterfront Peel session ? would be a better and more interesting goal. Bands would be given four hours to set up and record their track and then allotted four additional hours for mixing. Even within the imposed limits on the project, we vastly underestimated the time and resources this project would require. We also kept adding bands; we couldn't say no. After all was said and done, twenty two bands recorded material over the course of three months in 2010. We mixed about half of these and then we burned out. Everything stopped. I can't even remember why ? but about 12 sessions remained in the can, untouched. Cut to about a year later, the Ocropolis's imminent destruction looming, and our shame at setting aside the project drove us back into the studio to finish. We had to cut a couple tracks from the comp for copyright reasons...so we're left with 20. All bands generously agreed to donate proceeds from the compilation to two Japanese charities NOTES: A Koozie is a foam insulator used to keep your beer (or alternative beverage cold). Required for all beers consumed at the Ocropolis. A Woodie is the Oneida name for an electric combo organ from the 60s and 70s. It must contain some wood. The Ocropolis probably contains at least 20." (Are they referring to organs or members here? heh heh)