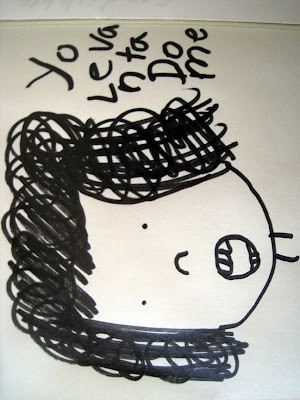 It was Loma P's birthday the other night. Punto, Loma P, Rafi, and I went to for Indian food at a hotel in Santiago. Rafi is Loma P's daughter and appears atop the shrine of Freddie Mercury. When at the beach over the New Years weekend in Zapallar; Rafi taught me a great game called Senor Lápiz. It apparently dates back to the ancient days of Loma P's childhood. A television show Cachureos birthed the mighty fighting pencil which you can see here:
http://www.youtube.com/watch?v=0GA-_RnNLYU
You simply scribble on a piece of paper and provide a single letter of the alphabet for the person drawing. It is then their responsibility to create a drawing a of a thing that starts with that letter and fill in the word or phrase. Upon completion the person does the same and passes it on to the next person or back to the original scribbler. The drawing above is Rafi's use of my scribble and the letter Y. The phrase translates as
"This is me in the morning"
We filled quite some time and space with Senor Lápiz which means Mister Pencil.